From the Barrel of a Gun
Daily Pundit
Borepatch
Only Guns and Money
Mostly Cajun
The View From North Central Idaho
Armed and Dangerous
Hell in a Handbasket
View From The Porch
Guns, Cars, and Tech
Legal Insurrection
Irons in the Fire
Volokh Conspiracy
Snowflakes in Hell
Power Line
Michael Bane
Reason
The Smallest Minority
Publicola
The Silicon Greybeard
Saysuncle
Of Arms and the Law
Infodancer
Speculative Fiction
GunBlogBlackList
John Lott
IRS Scandal
Monster Hunter Nation
Just The News
Behind the black


With no explanation, I might add. How on earth is this acceptable?


Of course the Dem governor will veto. The party is desperate to put the kibosh on voter ID (and even more so, election audits).

A veto override looks unlikely at 19-16, so the state will likely need a new governor first.. a prospect made more difficult by the lack of voter ID requirements.


It sure looks like she did. How does that happen?


Historically, it's the FBI informants who are the ones calling for violence.

DOJ continues to abuse the law to investigate Trump


55% favored audits overall, which suggests (at least to me) that roughly 55% actually voted for Trump and wonder why he didn't win. It should be obvious that you can't have a democracy when the majority think the elections aren't honest. We need audits to figure out what happened and fix it.


The Democrats will use this to pressure for dropping the filibuster on legislation, because they know they have just two years to solidify their control of government before the backlash hits at the polls.

Will they succeed? We'll see.


There is nothing racial in the bill, but everyone involved knows that already. This is, purely, a power play: can DOJ block states from requiring honest elections?


There is no doubt that this is a political police force. It will be used for political repression.

PA may have the votes for a full forensic audit...


We don't have a report from the AZ audit yet, but there's enough smoke there -- especially withholding the routers -- to be pretty sure there's a fire, just not what kind of fire.

And immediately after the PA audit announcement, the White House plans a trip to counter it. And the PA secretary of state directs counties not to cooperate.


Biden is not going there to give a speech, he's going there to talk to people in and around the speech, and figure out how to respond to an audit in PA.

For those who may have forgotten, AZ-PA-GA is enough to change the outcome of the election, and there are audits in some form in all three now.


If you can log in remotely to the election servers, with admin privileges, you can pretty much do anything to change the results without an audit trail, especially if you have the MS SQL access tool installed to bypass the election system itself and directly adjust the database... and recall that tool has already been found on other election systems that displayed strange behavior.

FBI has thousands of pages about Seth Rich


Now the FBI has started releasing documents, with the first batch having 137 heavily redacted pages. Some interesting information has already turned up, but nothing really concrete. A second release raised a lot more questions.


The mere presence of this tool on the system should decertify the election system. There's no valid reason for it to be present during an election.


If this was a legitimate investigation and not tampering of some kind, why keep it secret?

Racism is a public health emergency?


Well, it's an emergency that Lightfoot is a racist holding public office, yes.


Let's find out if the election was honest or not. There are many credible accusations of problems. I want to know the truth. Don't you?


Yes... it's a purge of people who are likely no longer legal voters, so they can't be used for fraud.


Misaligned ballots would lead those ballots to be placed into the adjudication process, where the adjudicators -- anonymously and without supervision -- decide how to count the votes.


Do you think just possibly the workers her agency provided were biased and had motivations less than the purest?


Funny, isn't it, how they always seem to target Trump's lawyers? It's almost as if they are looking for reasons to penetrate attorney-client privilege and deny Trump legal representation.

AZ to do third ballot count


The question is, will this purely mechanical count (only counting ballots, not votes) match what the audit said or what the official tallies said?

And if they are different... why?


That such an obvious idea as 18-year-old adults having 2nd Amendment rights is viewed as controversial...


I think this is a significant escalation from fact-checking public posts on social media, and even from doing that in direct/private messages on social media platforms. Cell phone messaging predates most of the internet services messaging capabilities and is generally viewed as significantly more private. If this is implemented, suddenly the Democrats will be inserting themselves into the private conversations of many older and less technically sophisticated Americans who did not previously feel personally impacted by spying and censorship.

I think this will backfire dramatically. 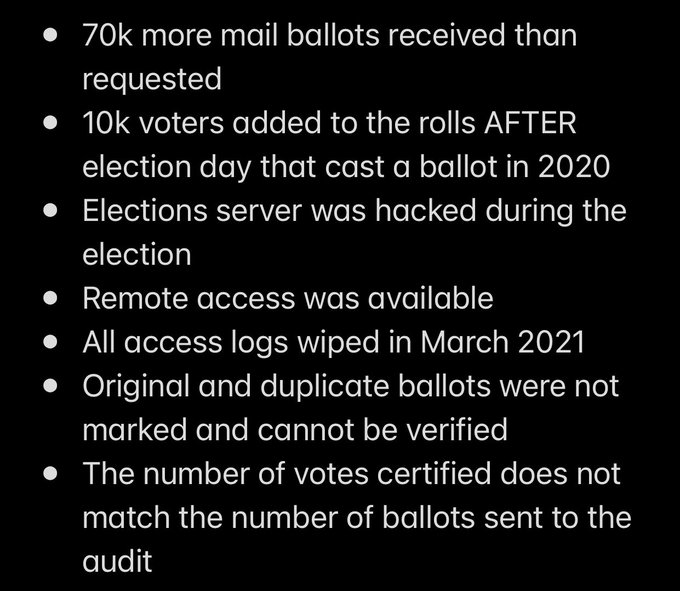 The presidential election in Arizona was decided by about 10K votes.

From the audit results, just the preliminary ones so far, we have more than 70K absentee ballots received than were mailed out. Where did they come from, if not fraud? Poor record keeping of mailed out ballots is possible but that many? And if by some mischance the record was lost, shouldn't we -- in the interests of keeping our votes safe -- discard the resulting unknown ballots?

There were 10K voters added to the voter rolls after election day that nevertheless cast a vote in the election. That shouldn't happen. Those ballots should not be counted.

Duplicate ballots were not serialized and cannot be matched to their supposed original ballots. This is an easy way to insert new, fake ballots into the process. 25K duplicate ballots. (Video)

Bleed-through on ballots may have invalidated votes. Does this point to improper paper stock used for ballots? Election-day print-on-demand ballots may have been legitimately printed on ordinary paper stock, and there were 168k of those print-on-demand ballots. Meaning this issue could go either way -- Trump voters are more likely to vote on election day, and legitimate Trump voters might have their votes canceled. Or, invalid ballots on incorrect paper stock may have been injected into the system as part of a fraud operation. More investigation is being conducted here.

And the totals reported do not match the totals provided to the audit. We don't yet know by how much; a third physical count is being conducted.

Even ignoring the cybersecurity angle, this should be enough to overturn the election in Arizona, pending the final report. And Maricopa County is still hiding something.

We may see a criminal investigation from this.

House Democrats have already initiated a political investigation in an attempt to minimize the damage.

I am not a lawyer, and nothing on this site should be taken as legal advice.

This site is run on custom blog software and is being actively developed. Please be forgiving of errors.

This website is an Amazon affiliate and will receive financial compensation for products purchased from Amazon through links on this site.